As part of the Asian Platform for Global Sustainability and Transcultural Studies (AGST), the Graduate School of Economics invited Professor Maria Fonte from the University of Naples Frederico II to share her experiences on Comparative Development Studies. From November 2nd to 11th 2015, Professor Fonte delivered four lectures exploring the topic “Development, Transition and Real Utopia”. This series of four sessions was designed to provide students an opportunity to discuss various frameworks for the analysis of the current “crisis” and major “turning point” in the global agro-food economy with a special focus on Europe. Participants in these sessions include students from the Graduate School of Economics (GSE), the Graduate School of Agriculture (GSA), and The Graduate School of Advanced Integrated Studies in Human Survivability (GSAIS) from Kyoto University – joined by their counterparts from Thammasat University (Thailand) currently on exchange program at the GSE. 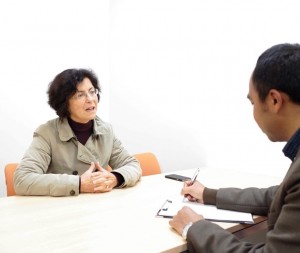 At the end of her visit to Kyoto University, we invited professor Fonte for an interview to ask her few questions on her first experience in Asia particularly at the GSE.

Q1: Professor Fonte, thank you for this interview. This is your first experience in Asia, could you tell us about your impressions about the Japan and particularly about your experience at Kyoto University?
The first impression about Japan is that of a country full of history, in which a diffused wealth is not in contrast with spirituality and respect for the tradition, the people and the nature. It was a really positive and new impression: at least in Kyoto it seemed to me that a diffused wealth is not necessarily blended with the consumerism that characterizes many of the so-called ‘developed’ countries, but it is based on the respect of the past and the local traditions.

Q2: During this program, you delivered four lectures exploring the theme: “Development, Translation and Real Utopias”. Could you tell us about your impressions about the class?
I loved to teach to students coming from so many different countries. The class was, it is true, heterogeneous as for the geographical provenance and the academic formation, but the differences became a source of richness in the debate of topics like food security, transition to sustainability and sustainable diets, equity and democracy of the food system. Students were a very active part of the course, interchanging the local knowledge of their contexts and teaching me very much about the food economies of their own countries, Southern and East-Asian countries, but as well Ethiopia, China, Japan.

Q3: in 2009, the FAO published a report on the future of world agriculture: ‘food production needs to be increase 70-100 percent to its current level to keep pace with the demand of the world population expected to reach 9 billion by 2050’. Yet, the same organization also acknowledges that today, we still have enough food to feed the world population albeit the 900 million going to bed hungry. In your opinion, is the production really the solution?
Already Amartya Sen, who was assigned the Nobel Prize for Economics in 1998, demonstrated that famines occur not from lack of food, but from inequalities and lack of access to food. I think we should start from here: fighting inequalities and securing mechanisms for a more equitable access to food, which implies building new, more democratic forms of governance of the food economy. Involving people in the democratic governance and management of the food system at various levels, from the local to the global, I think is the most effective and efficient way both to tackle the problem of hunger and malnutrition that already affects large part of today world population and to guarantee an equilibrium of supply and demand of food in the future.

Q4: In your lecture, you talked not only about the food production but you also touched upon the importance of how we do consume. What is your message for those who are studying sustainable development and particularly for those who might be interested to explore alternative food networks? 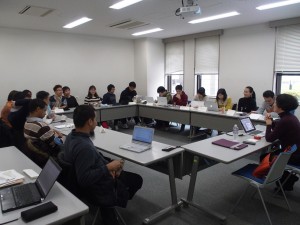 Alternative food networks look at the complexity of food systems as a totality, that means both as a production and a consumption system. Until recently studies on the food economy have been concentrated on the supply side. The emergent and pressing problems of sustainability and climate change urge us to look not only at systems of production, but also at systems of consumption. Furthermore consumers around the world have increased their awareness of the differentiated social and environmental effects of the goods they consume and they are taking action in support of methods of production, which do not exploit people and nature beyond sustainable thresholds. That is why alternative food networks highlight the role of consumers acting as ‘ecological citizens’ and reclaiming their right to a more just and sustainable economy. My message to students who want to approach the field of food studies is to look in their contexts for initiatives and actors who are working for the transition towards a more sustainable and just model of food production and consumption and support them with their research and their knowledge.

Q5: Your research is focused on European agriculture and you wrote extensively about the topic of rural development, agro-food system, local food, alternative food network. As this program gathers students from different backgrounds and different countries mainly in East and Southeast Asia; could you tell us if there were some specific elements of discussions, which really catch your particular interest during the classes? 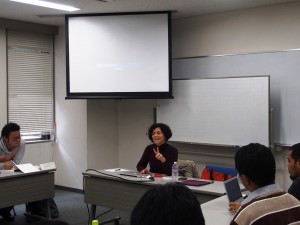 Many things caught my interest in the discussions we had during the classes, but I want to stress few of them in particular. First of all listening to people who lived direct or very close experiences of social injustice in rural areas made me angry and sad at the same time. Second it is still widespread even among students the idea that sustainability and poverty are separate issues, as if sustainability were a matter of concern for rich countries and rich people, while poor people have to think how to fill their stomach. In contrast to this view, we know that climate change will affect first and foremost poor countries and poor people. Furthermore from the premises above (hunger and malnutrition are strictly linked to inequality and access to food) it follows that hunger will not be defeated without a struggle against social and environmental injustice. To understand the systemic links of all these problems (poverty, hunger, environmental sustainability, social justice) is the challenge I wanted to deal with in the intensive course. But finally what mostly stroke me was to see young people from different backgrounds, different countries, different religions, gathering together and discussing about these topics in the respect of each other ideas and opinions. Coming from Italy, still shocked by the terrorist attack in Paris, I was really relieved to see how different cultures may not only co-exist but also bring ahead a fruitful dialogue about topics of common interests to us as human beings. I think this is the greatest value of this Comparative Development Studies program, and I really appreciate Kyoto University for sustaining such programs.


We also asked some students about their opinions regarding the classes:

Ms. Ayaka Nomura from Japan and student the GSAIS
“Professor Maria Fonte’s lecture was very informative and interactive. Her lecture provided us a comprehensive development of sustainable agriculture in Italy. The students were mostly from South East Asia, thus the exchange of the information about the current food issues in their countries and her lecture brought up interesting contrasts on how we should develop our agriculture sustainably. This gave me broader perspectives and more understanding of its topic”.

Yiming Wang from China and student at the GSE
“Professor Fonte is very knowledgeable, kind, and has a really warm smile. She brought us an excellent course about the alternative way to the food system. What she taught us has inspired me a lot, and will be very helpful in my further research about China. It’s a pleasure to listen to her course. And I hope could see her again”.

Panit Buranawijarn from Thailand and student at Thammasat University
“As an economist with no real previous experience with the fields of sociology or even agricultural issues, I found the classes to be both interesting and stimulating. It was eye-opening to approach topics from a different approach than I am used to, and it certainly added to my knowledge to learn about alternative food networks and agro-ecology, topics which I would not normally have been exposed to. I would like to thank Professor Hisano for that; for encouraging students from different backgrounds to be exposed to new fields of study”. 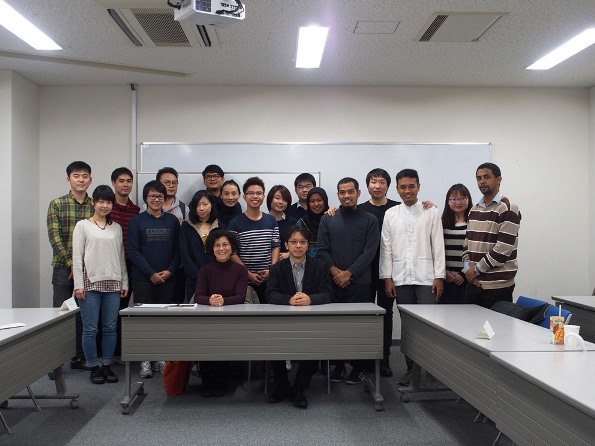