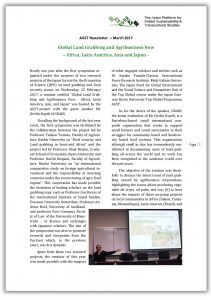 Nearly one year after the first symposium organised under the auspices of two research projects of the Japan Society for the Promotion of Science (JSPS) on land grabbing and food security issues, on Wednesday, 22 February 2017, a seminar entitled “Global Land Grabbing and Agribusiness Now – Africa, Latin America, Asia, and Japan” was hosted by the AGST-project with the guest speaker Mr Devlin Kuyek of GRAIN.

The objective of the seminar was threefold: to discuss the latest trend of land grabbing caused by agribusiness corporations, highlighting the issues about producing vegetable oil crops, oil palm, and soy; (ii) to hear about the impacts of these ongoing projects on local communities in Africa (Gabon, Tanzania, Mozambique), Latin America (Brazil), and Asia; and (iii) the involvement of and implications for Japan in general, and the Japanese corporations in particular. 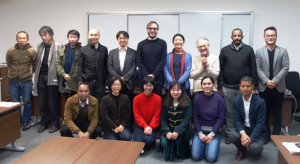