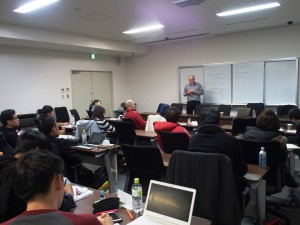 From January 25-29, 2016, the Asian Platform for Global and Sustainability and Cultural Studies (AGST) under its module 1 Environmental policy and rural development studies, hosted Professor Raymond Jussaume, Chair of the department of Sociology of the Michigan State University to deliver his annual lecture on Comparative Development Studies.

After one intensive week at the Graduate School of Economics, Kyoto University, we invited him for an interview to ask some feedback about the program in general and to discuss about the new shifts within the research in sustainable development.

Professor Jussaume, thank you very much for this interview. How long have you been teaching this class at Kyoto University?
I think this is my fourth year. The first year I came, the number of the students was much smaller, they were only eight or seven maybe and this year, there were over 20, so certainly, the program is growing. And I do think, for the most part, the students were very engaged. I think one of the challenges is that about half of the students are visiting master’s student from Thailand, Thammasat University. They are quite good students. But they are more students who are in effect doing what I would call an “applied master’s degree”. There interests are more on the application of knowledge, and on the other hand, there are regular graduate students, including PhD students here at Kyoto University. In terms of the classroom dynamics there is no problem at all, but for me, the challenge of giving guidance or assistance to those students who are trying to develop research projects. The class I do is very much conceptually oriented class, so I am trying to give them some understanding of some of the key concepts of sustainable development while at the same time finding some examples or things we can discuss to help students who are trying to apply those knowledge, for example on how to work in policy or how to work at a local level.

All along these years how was the shift in the discussions and the research interest of the students.
Well, I think the changes especially come from the different empirical interest of the students. This year, there are probably more students interested in food and agriculture. In other years, they might be broadly about rural development issues, which is not simply about food and agriculture. And the other thing is that the student are coming from a variety of backgrounds or interest backgrounds, even this year, some students are studying accounting, finance, or history. They are all interested in sustainable development but from different background. Each year, the mix is a little bit different. In one sense, it is very challenging because the conversations don’t get stalled. On the other hand, it keeps me on my toes. Obviously, I know much about food and natural resource systems; however, if people are more interested in urban systems, then my knowledge level is much more limited. So, that’s another part of the challenge but it’s still fun to try to learn from the students because they do have some interesting experiences. 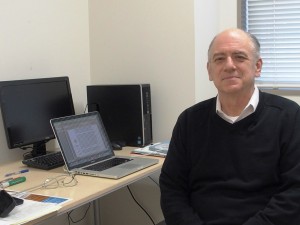 “Development is a contested idea” how about the progress or shift in terms of research approach?
I don’t know if I like to use the word “bifurcation”, because I don’t mean that these two groups are not talking to each other. But you have on one hand, people who are trying to tackle sustainable development at a very global level. That’s because in part, we are beginning to recognize that an increasing number of problems are global level problems. In class we talked about the issue of public goods and the issue of the tragedy of the commons. And there is an interesting contradiction because over the past 100 years, there has been a push for private property rights. On the other hand, there is a growing recognition that the whole planet is a global commons in a way that we have never realized before, especially with relationship to environmental issues. Maybe up until recently, in human history the last 50-60 years, there used to be a phrase called “the solution to pollution is dilution”, I don’t know if people are familiar with this. One case related to that is for instance, when I was in Rio de Janeiro, people used those giant pipe that took the human waste from the city to the ocean, with the idea that the ocean is so vast and so big to do that. Well, we realized that we cannot do that anymore because we are generating so much waste. And of course, there are a lot of talks about climate change. Unfortunately, the talk about climate change in public sphere is so limited, because everyone talks about CO2 but there are actually over 200 artificial human made chemical compounds that are in the atmosphere, that are having one impact or another on climate. Our understanding of that is so limited. So there is this new notion of wicked problems, it’s not that new, already emerged 40 years age, an old issue that became more popular these days. There is one group of people that are trying to study these kinds of issues and try to come up with solutions to those kinds of issues and of course there are local issues, there are people who are very much interested in how to regulate the commons or work on development issues on a very community level. Like Elinor Ostrom whose works we talked about during classes, and then you these two levels and of course the part of the issue is that they are connected. But how do you connect them intellectually. Connecting the macro and micro has always been a challenge in social science and we have never done it really well, I think that’s what I see more as an evolution, there are groups of scientists devoted and other devoted to the study of local issues.

One thing that was really interesting from your lecture was this anecdote about Haiti, in which you underlined the gap between experts’ point of view and the understanding of the local people’s aspirations. Sustainable development has been a tyranny of experts as mentioned by the development economist William Easterly. Considering this situation, what would you suggest to the graduate students for their researches?
I mentioned during the class, if I were starting again now as a graduate student, no matter in what field: sociology, political science or economics. I would like to train myself in what is called “participatory action approach”. And I say approach because people mistakenly call participatory approach a methodology. It is an approach to research because you can use it with any methodology imaginable. Be it econometric analysis, large data survey work, or qualitative work. What Participatory action really is, one way I describe it, is: in the past, we thought of social scientists thought of the people whose life they were studying as subject. And we even still in the US have this thing called “human subjects review board”. Before I do research, I have to get the permission to make sure I’m protecting the rights of subjects. 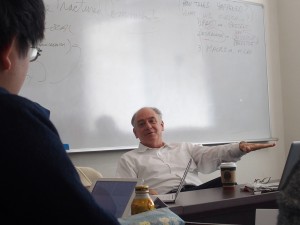 And we kind of moved from subjects to the next stage, so then subjects became, I would say, somebody you doing an exchange with. The next step is for people to become “actual participants” in research. “Participant” in the research doesn’t mean that there’s no room for the experts. Similarly, it doesn’t mean necessary that people become the experts. Climate change is a good example, because even the experts don’t completely understand what’s going on, and to assume that the people do of course would be silly and certainly not the policy makers. And by the way, I would distinguish researchers and policymakers so you have separate groups there. But what it means is that the participants help the researchers with problem identification. The participants help the researcher to understand the contexts. And then, the researchers help the participants with understanding concepts and methods. Together, they develop a research project that first of all is more empirically accurate, more informed, and the quality of the data improves, in technical terms you minimize error. On the other hand, the research becomes more useful in society because people feel like they have a stake in the research and thus are keener to use it rather than just filling out a survey you and then you give them the results they may or may not pay attention.

Professor Jussaume, when you go to class, what are your expectations from the students?
I guess for each class, I try to modify my expectations based on the students. Like participatory action research, I also think students need to participate in the learning process. So, I think, it depends on the students, some are more visual learners. Some students are other kind of learners. The students have also different needs. My goal in teaching a class, I’ve never achieved it. In old days in the sixties, there was a movement at some universities like Berkeley and so on, where the students would go in, take the professors’ syllabus, rewrite it and come back and then say: ‘this is what we want you to help us to learn’. It was called “reconstituting the class”, because the students felt that in some discipline, what the teachers focused on was not significant. I always offered the students the opportunity to rewrite the syllabus. They were shocked by that, having no idea about what is going on. My ideal class would be a class where I would walk in, and the students would tell me: “this is what we want you to help us learn”, that would be my ideal class.

I hope you would achieve that in Kyoto. A question totally out of our topic. How do you find Kyoto?
How do I find Kyoto? Oh, I think, I like it better than Tokyo. I like Japan in general. I spent some time here several years ago, two years in Okayama, one year in Kanazawa. I think Kyoto city has a good size, it has a lot to offer and yet it’s not too big is not too difficult again around so I think it’s very comfortable place to live.

Professor Jussaume, thank you very much for this interview. 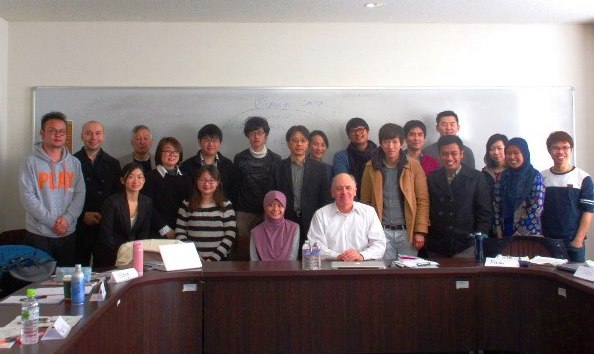