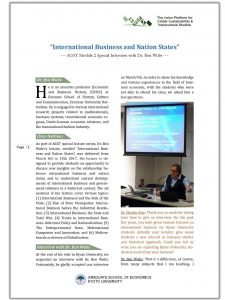 At the end of his visit to Kyoto University, we requested an interview with Dr. Ben Wubs. Fortunately, he gladly accepted our interview on March 9th. In order to share his knowledge and various experiences in the field of business economic, with the students who were not able to attend his class, we asked him a few questions.

Dr. WooJin Kim: Thank you so much for taking your time to give an interview. For the past few years, you have given various lectures on international business for Kyoto University students. Actually your lectures gave many students a new interest in business studies and historical approach. Could you tell us what you are expecting Kyoto University students to learn from your lectures?

Kim: This year, you delivered special lectures on international business and nation states. Could you briefly tell us about your lectures and impression of the class?

Wubs: The class is arranged in six parts. We started with a general overview of what international business is, what multinational is, and what foreign direct investment is. And the second part was in-depth class: what is the role of the state? As I mentioned before, the state is always in. That is why I’ve tried to show. In the second class, I’ve tried to see the origin of the modern multinational, which goes back to the 17th century. And a lot of American international business researchers denied that there is continuity between the early childhood companies and modern multinationals that I’ve seen much more continuity. And in the third class, we talked about the role of the war, the total war, and multinational companies, and why European multinationals are decentralized compared to American multinationals. In the fourth class, we talked about the treats after the war for the multinational companies, nationalization, and Anti-trust regulation. And in this morning, we discussed the role of innovation and international business. And we talked about Mariana Mazzucato’s idea of the entrepreneurial state. And tomorrow, we will talk about multinationals, globalization, and multinationals as drivers of globalization.
My impression of the class is that it is very international class. People come from everywhere. They come form the Philippines, from China, from Belgium, Spain, Indonesia. There are three students from Japan, but they are actually a minority. And I like the atmosphere of the class. Students are very friendly and very eager to learn. The discussions are very nice. And I’ve learned a lot from these discussions. And I hope they learn something.

Kim: In these days, the relationship between international business and nation states has been analyzed (or has been approached) from various perspectives. For instance, a market economy-based perspective can be used as one of its analysis channels and a political economy-based approach can be another analysis tool. Of course, it is very difficult to make an absolute value judgment as to which perspective or way of approach is more important. What do you think is the most important factor in understanding the relationship between international business and nation states?

Wubs: I think we need both. Economic factors are important for the development of multinational companies, but there is a tendency to leave the state out. And that’s very strange. So, you also need to take a political economy perspective. That’s why we discussed Mariana Mazzucato this morning. She shows that the state is very entrepreneurial. And a lot of private business are using actually the inventions of the universities or the state laboratory to make a profit. So, you need both perspectives. And there is actually a third perspective. Because I think many big companies all operate oligopolistic markets. And you can even ask yourself. Are these markets free? To what extent, they are not dominated by just a few companies. They are, for example, Google, Apple, and Microsoft who are so dominant at the moment. And Anti-trust authorities are not often taking action against these companies, but they are severely dominant. So, you need different perspectives to understand the role of multinationals absolutely.

Kim: You are well known to Kyoto University students as a ‘Business and Economic Historian’ like Prof. Kurosawa. As you may know, the field of business and economic history began to receive considerably more scholarly attention from various social scientists. And many researchers are well aware that analyzing economic issues in a historical context is very significant. In the extension of such recognition, could you tell us why the current development of international business and government relations should be understood (or should be approached) in a historical context? 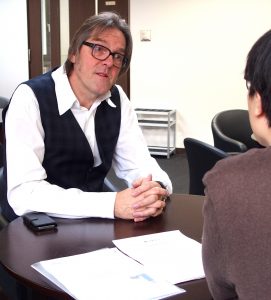 Wubs: In Rotterdam, in the business school and in the economic department, which are very large and very important, I think the business school is the number seven in the world, they almost have no historical approach. Business history is not even in the curriculum of the business school. How can you understand a business, a sector, a cluster, and an industry without a historical or evolutionary approach? If you just research an industry, and you just do it from… let say 5 years perspective or just take a situation now, then what do you understand? Because things are in flux and movement. If you want to understand anything about the business and the world, I mean history makes sense. Because for me it’s so natural. I always take a historical analysis. I am actually stunned by the historical approach of modern economy. How can you understand the crisis of 2008 without going back to the 1930s? I am not saying that this is the exact similarity. But you can learn frameworks, you can learn to understand things and then history makes sense. I mean history is proven. It’s so valuable to understand things in the world. And I think you cannot understand the business community nowadays if you don’t understand where it comes from.

Kim: Your research is mainly focused on business history, economic history, international relations, and fashion. What makes you interested in these research areas?

Wubs: I thought already 30 years ago that multinationals are so important to understand the world economy. To understand modern economics, the economic situation in the world, and also especially in the Netherlands, multinational company was so important for the economic life and also for the political life. And I began to focus on these international businesses. And I always have an interest in the war, how wars change the position of these multinational companies, how multinationals were influenced, and how multinationals influence the war again. So, that really triggered my attention. And from then, I developed an interest in international relations. I began to teach international relations. And 5 years ago, I got an interest in the fashion. I’ve always had an interest in fashion, myself. Then, the older I become, the more honest I become. So, I tried to do research what I really like. So, I did research on pop music. I only want to do in the next 10 years the things that I really like.

Kim: Just as you’ve always done for M.A. and Ph.D. students of Kyoto University, you devoted your attention to giving various advices on their research. Frankly speaking, we do not have the slightest doubt that your comments and ideas will enable them to broaden their research scope as well as their knowledge of business and economic studies. Perhaps, most of the readers of your interview script are the students who are dreaming of becoming an outstanding researcher like you. As a senior researcher, what are your key messages to these potential scholars or your future colleagues?

Wubs: Stay eager and stay hungry. Try to learn as much as you can from different sides. Try to make your research always full of multidisciplinary aspects. Read philosophy as well. Try to understand theories, but don’t become a theoretician. If you want to be a good economist or a economic historian or a business historian, you need theories. But don’t become a theoretician. That’s what I hate about international relations theory. There is so little empirical knowledge in it. Most of it is just a theoretical discussion. And theory does not solve anything. Theory should always be helpful for us. But you should read theory and should try to understand. Read the big thinkers. Read the big economists. Read Karl Marx. Read Joseph Schumpeter. Read Keynes, Adam Smith, great literature. And enjoy reading. And never put yourself just in the corner. Try to broaden your view. Have a fun as well.

We also asked students their opinions on Dr. Wubs’s class.

Kim: What is your impression of Dr. Wubs’s class? Do you have any feedback or comments on his lectures?

Mr. Eduardo Mariz(Spain | Master’s student): Dr. Wubs’ class offered a new perspective on multinational corporations, their origins and the dynamics of international business. Over the course of a week we were introduced to several frameworks on international business, such as John D. Dunning’s eclectic paradigm, and the reasons corporations internationalize their operations. Dr. Wubs’ research on Unilever illustrated strategies by multinational companies to minimize political risk and how the identity of multinational corporations has shifted from cosmopolitan to nationality since WWII. As a business historian specializing on MNEs, I have found these contents very useful for my research.

Ms. Yiming Wang (China | Ph.D. student): This intensive course was very interesting and inspiring. Dr. Wubs led us to go through the history of how MNCs and Nation States influence each other by analyzing several typical cases. Through the course and reading materials, we also learnt various theories regarding International Business, and how to conduct research from both theoretical and empirical aspects as well. I am very glad that I have attended his class, it helps me a lot.

Mr. Dellatte Joseph (Belgium | Master’s student): I liked this Business History Seminar that allowed me to combine historical science and methods to the economics theories on firms development. I found interesting the way Dr. Wubs presented his work and analyses about multinationals and especially the Unilever case. This seminar was a good opportunity to demystify the idea of how multinationals are built and organized, it eventually helped me to link previous knowledge with new inputs.