From May 7 to 11, 2018, Kyoto University hosted the Fourth International Graduate Workshop on Food, Farm and Rural Development. The workshop was organized by Kyoto University’s (KU) Graduate School of Economics and the Asian Platform for Global Sustainability & Transcultural Studies (AGST), and Wageningen University’s (WU) Rural Sociology Group from the Netherlands. The objective of the workshop was to facilitate exchange between students and faculty, and to challenge students to further develop their research. The following describes some key highlights from the week.

Before the student presentations began, Professor Shuji Hisano (from KU’s Graduate School of Economics, and Director of AGST) and Professor Joost Jongerden (from WU’s Rural Sociology Group and a project professor of AGST) kicked-off the workshop by welcoming all the participants. Professor Hisano was pleased to announce the continued collaboration between the Asian Platform for Global Sustainability & Transcultural Studies (AGST) and WU’s Rural Sociology group in terms of education and exchange, noting the interesting ways these two groups have come together to work on key agri-food issues using critical theoretical and analytical frameworks. He spoke of building upon the ongoing informal supervision with Master’s students and to also establish a joint PhD supervision programme.

Following Professor Hisano’s remarks, Professor Jongerden, commented on how he was looking forward to a fruitful exchange given the diversity of research topics and locations (nine countries: including Chile, China, Germany, Indonesia, Japan, Nicaragua, Philippines, UK, and USA) and the different nationalities represented by students and faculty (ten countries: Brazil, China, Chile, Germany, Holland, Indonesia, Italy, Japan, Madagascar, and USA). In closing, he spoke of how he hoped that all participants would use this workshop as an opportunity to further their research. 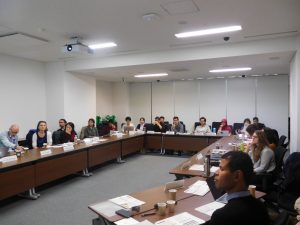 Overall, student presenters came away with many lessons. Most found it to be a worthwhile exercise to improve their work and to prepare for future presentations, such as their final defence. Many received constructive feedback and received tangible advice from their more-experienced peers and attending scholars about how to improve their work, such as ways to make arguments more compelling and identify blind spots in their analysis. The lively discussions did not end during the Q&A sessions… many were happy to continue to exchange during social outings together.

The workshops closed with two presentations by experts working on agri-food issues in Japan. First, Professor Hisano presented what has been happening in relation to Japan’s experiences of re-agrarianisation and re-peasantisation and the ways that two conceptual frameworks: ”re-de-agrarianisation” and “re-de-peasantisation”, capture or fail to explain agrarian and rural dynamics in Japanese agriculture. 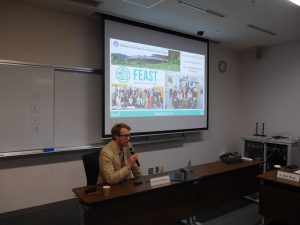 Next, Dr. Steven McGreevy, associate professor at the Research Institute for Humanity and Nature (RIHN) spoke about the FEAST Project, a five-year interdisciplinary research project that he leads at RIHN. Research is mainly conducted on the environment aspect of agri-food issues in various countries, namely Japan, Thailand, China and Bhutan. Research is conducted by in-house researchers and more than 100 affiliated members. Dr. McGreevy presented some research findings on topics such as ecological footprint of food consumption, food system mapping, urban agricultural land loss in Kyoto, etc.

For the last two days of the meeting, participants could learn first-hand about local agri-food issues, the different types of farming entities and the challenges they face during four site visits, including: (1) a vegetable-distributor dealing mainly with new entry farmers (called Saka no Tochu Co., Ltd.), (2) a famers’ market (called Tawawa Asagiri) operated by an agricultural cooperative association in Kyoto, (3) an automated vegetable factory (called Spread Co.), and (4) a young organic farmer located in Kameoka city (2009 graduate of KU’s Faculty of Economics). Finally, participants attended a seminar on food sovereignty at RIHN, where they could meet and talk with one of the core members of an alternative distribution system of organic vegetables (called Kyoto Organic Action). The field trips were well-received by the participants who were grateful that they could see and hear about actual opportunities, pressures and dilemmas that individual farmers and distributors, as well as corporations in Japan currently face. 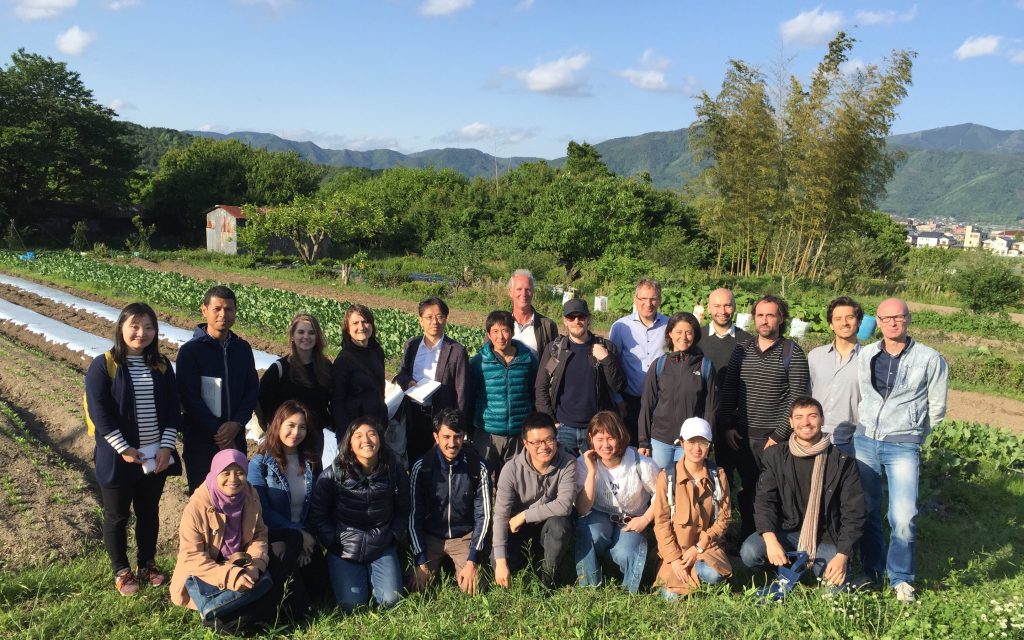