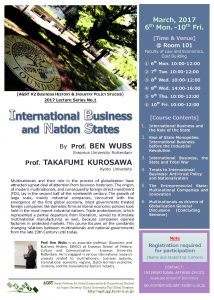 Multinationals and their role in the process of globalization have attracted a great deal of attention from business historians. The origins of modern multinationals, and consequently foreign direct investment (FDI), lay in the second half of the nineteenth century. The growth of large scale, mainly industrial companies, concurred with the emergence of the first global economy. Most governments treated foreign companies like domestic firms as liberal economic policies took hold in the most import industrial nations. Trade protectionism, which represented a partial departure from liberalism, served to stimulate multinational manufacturing as well, because companies opened factories in protected markets. World War I was a turning point in the development of a global economy. Yet multinationals continued to operate and even expanded during the 1920s and 1930s. After World War II multinationals began to play a key role in the world economy. As multinationals by definition operate in at least two different nations they necessarily have to deal with two different governments. As a result of this interaction there may be conflict or cooperation between multinationals and host and home governments. This course focuses on the constantly changing relations between multinationals and national governments from the late 19th Century until today.