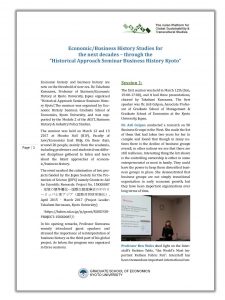 Economic history and business history are now on the threshold of new era. Dr. Takafumi Kurosawa, Professor of Business/Economic History at Kyoto University, Japan organized “Historical Approach Seminar Business History Kyoto”.The seminar was organized by Economic History Seminar, Graduate School of Economics, Kyoto University, and was supported by the Module 2 of the AGST, Business History & Industry Policy Studies.
The seminar was held on March 12 and 13 2017 at Mizuho Hall (B1F), Faculty of Law/Economics East Bldg. On these days, around 20 people, mainly from the academia, including professors and students from different disciplines gathered to listen and learn about the latest approaches of economic/business history.
The event marked the culmination of two projects funded by the Japan Society for the Promotion of Science (JSPS) namely Grants-in-Aid for Scientific Research: Project No. 15KK0087 – 地域の競争優位―国際比較産業史の中のヨーロッパと東アジア（国際共同研究強化）, April 2015 – March 2017 (Project Leader: Takafumi Kurosawa, Kyoto University)
In his opening remarks, Professor Kurosawa warmly introduced guest speakers and stressed the importance of reinterpretation of business history as the third part of his global project. As below, the program was organized in three sessions.

Dr. Asli Colpan conducted a research on 50 Business Groups in the West. She made the list of them that had taken two years for her to compile and found that though in many nations there is the decline of business groups overall, in other nations we see that there are still resilience. Interesting thing the list shows is the controlling ownership is either in some entrepreneurial or most in family. They could have the power to keep these diversified business groups in place. She demonstrated that business groups are not simply transitional organization in early economic growth, but they have been important organizations over long terms of time. 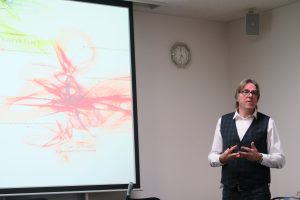 Professor Ben Wubs shed light on the Interstoff’s Fashion Table, “the World’s Most Important Fashion Fabric Fair”. Interstoff has been tremendous important international textile fair, and it was set up long before Première Vision was set up. But Interstoff lost its No.1 position in Europe because of the selective protectionist policy of Première Vision. Interstoff couldn’t follow the selective strategy because it was contradict its internationalization strategy and, at the same time, German law did not allow it.

Two scholars presented their works in the second session that was held in March 13th (Mon, 15:00-16:30). Dr. Gerarda Westerhuis chaired it. Professor Takafumi Kurosawa of Kyoto University was the first reporter. The second speaker was Dr. Christina Lubinski, Associate Professor of business history at Department of Management, Politics and Philosophy at the Copenhagen Business School, Denmark.

Professor Takafumi Kurosawa examined the relations between “Political Risks and Organizational Innovation of Multinationals”. The main message emphasizes on his presentation was that business history can focus on non-market elements, especially political risk, which had been too narrowly defined. Traditionally, business history studies focus on managerial issue or economic logic like scale and scopes, transaction cost or allocation of resources. He integrated more variety of element which are not usually explained by economic logics, such as political risks; war, dictatorship, nationalism, collapse of state. 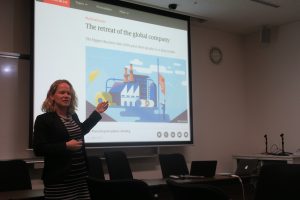 Dr. Christina Lubinski gave a new perspective on how to approach the analysis of “MNEs’ Responses to Decolonization” by looking into “The Advantage of Outsiderness”. Although current literatures exclusively see political risk as a negative factor, she stressed that there is a lot more political opportunity or opportunism that we are not really systemically including yet. She looked into German multinational companies in colonial India and advanced three main arguments in her presentation: 1) more politics become an issue, the more the organizational stricture of the company reflects that, 2) political positioning for these companies was never bilateral thing, but really a multilateral world view perspective, and 3) many of the political advantages are actually relative political advantages.

The last session was held on the same day (16:50-17:50) and it had three presentations. It was chaired by Dr. Daniel Wadhwani. Dr. Junko Watanabe, Professor of Economic History at Kyoto University, Japan was the first speaker. The following reporter was Dr. Grerarda Westerhuis, assistant professor at the Department of History and Art History, Utrecht University. And final speaker was Dr. Daniel Wadhwani, Associate Professor of Management and Fletcher Jones Chair in Entrepreneurship at University of the Pacific. He also holds appointments as a visiting professor in the Department of Management, Politics, and Philosophy at Copenhagen Business School and the Department of Economics at Kyoto University.

Dr. Junko Watanabe outlined different possible ways that could be applied to interpret “Trade and Investment between Japan and China”. She focused on FDI to see the industrial adjustment. When industry faces its decline process, most companies of the industry need to change management of resources. She argued that FDI is one of the solutions of industrial adjustment. The data used in the research are 1995-2015 and 2016 Edition of Toyo Keizai’s database “Kaigai Shinshutu Kigyo Soran, Kunibetsu-hen” {Overview of Companies Operating Overseas, sorted by Country}. The first part of the presentation was the overview of all provinces of China, and the second one is the case study of Guangdong province in south China. The data shows there is a wide variety of company in different industry, such as textile, retail, chemicals and so on. Her project is on going and intended to see the exit stage, in another word, duration of operation of those Japanese companies and see the existing network among Japanese companies each other.

Dr. Grerarda Westerhuis examined the relations between “Company Law Reforms and Institutional Change”. There is a long-running discussion if the national systems converge or diverge. For example nowadays we focus on shareholder value, it seems to be more convergence towards the liberal market economy. However, in her paper, it’s more interesting to know how the system changed by looking at company law reform. She concluded that the company law was not the heart of the corporate governance changes and found that though Netherland is often positioned as a civil law country, it also have aspects of common law countries.

Dr. Daniel Wadhwani looked into the Divergent Competitiveness of the Savings Bank Sector in the U.S. and Germany during the period 1880-1930. He argued that when we see the divergence between Germany and United States, we have to understand the mentality of the managers of the late 19 century and early 20 century and understand how they interpreted their own past and its imprecations for the strategy of the company by looking at sense making not as a psychologist or not as a learning theorist mind, but as historians. For example, historian should see the interpretation at that time of whether or not strategy should be about continuity or about change in order to get short-term competitive advantage. He concluded that 1) the reason why the theory of competitive advantage for firm changes over time in part is because the boundaries of what is considered the firm change over time, and 2) managers not only reacting to changes in the contexts but creating contexts over time.

The fields of Economic/Business history nowadays have encountered new challenges. This seminar provided the opportunity to share latest perspectives of the fields not only for scholars of different universities but also for the students in Kyoto University.